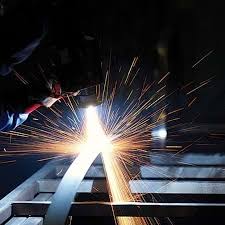 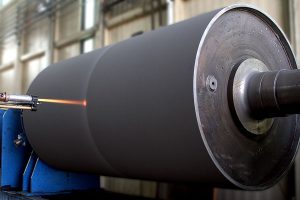 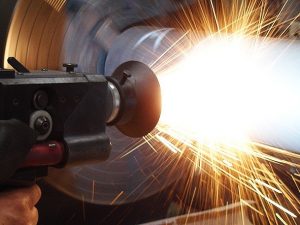 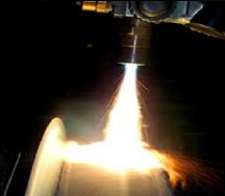 The term “Thermal Spray”  describes a family of processes that use the thermal energy generated by chemical (combustion) or electrical (plasma or arc) methods to melt, or soften, and accelerate fine dispersions of particles or droplets to speeds in the range of 50 to >1000 m/s. The high particle temperatures and speeds achieved result in significant droplet deformation on impact at a surface, producing thin layers or lamellae, often called “splats,” that conform and adhere to the substrate surface. Solidified droplets build up rapidly, particle by particle, as a continuous stream of droplets impact to form continuous rapidly solidified layers. Individual splats are generally thin (~1 to 20 μm), and each droplet cools at very high rates (>106 K/s for metals) to form uniform, very fine-grained, polycrystalline coatings or deposits.

Sprayed deposits usually contain some level of porosity, typically between 0 and ~10%, some unmelted or partially melted particles, fully melted and deformed “splats,” metastable phases, and oxidation from entrained air. Thermal spray process jets or plumes are characterized by large gradients of both temperature and velocity. Feedstock is usually in powdered form with a distribution of particle sizes. When these powdered materials are fed into the plume, portions of the powder distribution take preferred paths according to their inertia. As a result, some particles may be completely unmelted and can create porosity or become trapped as “unmelts” in the coating. Use of wire and rod feedstock materials produces particle size distributions because of non-uniform heating and unpredictable drag forces, which shear molten material from the parent wire or rod. The level of these coating defects varies depending on the particular thermal spray process used, the operating conditions selected, and the material being sprayed.

A major advantage of thermal spray processes is the extremely wide variety of materials that can be used to produce coatings. Virtually any material that melts without decomposing can be used. A second major advantage is the ability of most thermal spray processes to apply coatings to substrates without significant heat input. Thus, materials with very high melting points, such as tungsten, can be applied to finely machined, fully heat-treated parts without changing the properties of the part and without excessive thermal distortion of the part. A third advantage is the ability, in most cases, to strip off and recoat worn or damaged coatings without changing part properties or dimensions. A disadvantage is the line-of-sight nature of these deposition processes. They can only coat what the torch or gun can “see.” Of course, there are also size limitations. It is impossible to coat small, deep cavities into which a torch or gun will not fit.